Tropical forests provide valuable ecosystem benefits for local, regional, and global communities. They provide habitat for wildlife, support biodiversity, and remove large amounts of greenhouse gases (GHG) from the atmosphere. Forests also help regulate important natural processes, such as rainfall patterns and nutrient cycles, which are critical for the productivity of agriculture.

The overwhelming majority (80-90%) of all the water that reaches the atmosphere, and eventually becomes rainfall, traveling via plant transpiration.13 The dense moist tropical forests of the Amazon act as giant “water pumps” for much of South America, releasing billions of liters of water vapor from the trees into the atmosphere. In the Amazon, this process of transpiration, in which water vapor rises from the forests and falls again as rain, while flowing westward across the continent, has been referred to as "flying rivers"—the flow moves upriver toward the Andes Mountains, and then veers off, south and north, when it hits the mountain slopes. In this process, the rains generated by the forests supply substantial amounts of water to critical agricultural areas and densely populated metropolitan centers across South America. 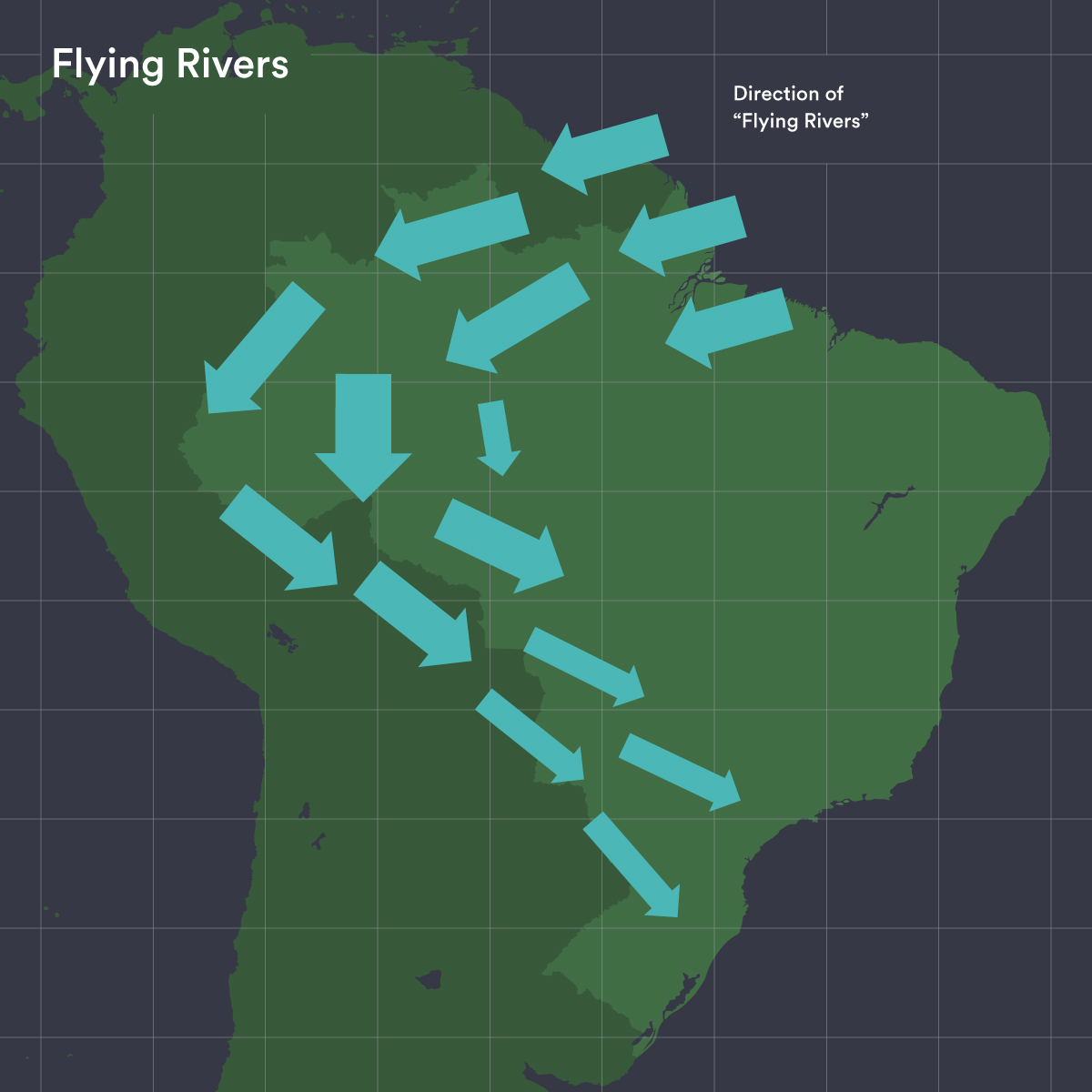 Graphics adapted from the Center for Global Development.

The large scale loss of tropical forests in the Amazon can trigger complex interactions between the atmosphere and biosphere.14 In the Amazon, the large scale conversion of forests to pastures can lead to an increase in average surface temperature of 2.5°C (4.5°F), decrease evapotranspiration by 30%, decrease precipitation by 25% and also decrease runoff by 20% throughout the region.15 The degradation of these critical ecosystem services could decrease the availability of viable pasture and alter the geography of agricultural production, significantly jeopardizing the potential productivity of agriculture in Brazil. These drastic changes could cause severe economic losses of up to US$4 billion.15-2

In addition, deforestation in the Amazon can act as a driver of global climate change and may impact rainfall patterns in areas as far as the western United States.16 Large scale forest loss in the Amazon has been projected to potentially reduce rainfall by up to 20% in the coastal northwest United States and by up to 50% in the Sierra Nevada snowpack, jeopardizing critical agricultural production.17

Large scale productivity losses in these major agricultural areas could pose serious consequences for food security and may potentially cause supply shocks in the market and increase the price volatility of agricultural products.

Commitments to verified zero deforestation cattle production throughout the supply chain are helping to ensure that forests are conserved, safeguarding valuable ecosystem services and the benefits that they provide.